In Summer last year, Islington Conservatives published their opposition to the Brown-Blair govt's home information packs (HIP). As we stated then, HIPs could undermine the housing market and increase the cost of buying and selling a home

Today Ministers were today forced into a humiliating surrender over home information packs. In a deeply embarrassing move, they postponed the scheme until August.

As Michael Gove MP stated today:
Can I ask why, after being warned over a year ago that they were comprehensively mishandling this issue Ministers have seen fit to retreat only now – with eight days to go before Home Information Packs were due to be implemented?
Finally on this topic, a little cartoon from todays Daily Mail: 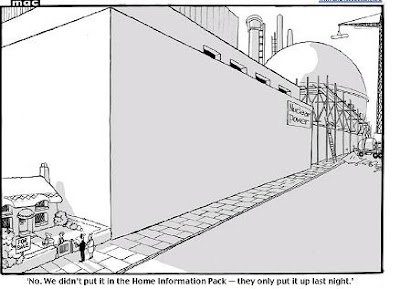 Posted by Duncan Webster at 9:05 pm